Being in week 39 of my pregnancy, I am finally able to eat 'nearly normal' again. I still do have heartburns and some digestive issues, but not as worse as before. The only thing that prevents me from large cooking and baking sessions are my feet and my large belly that is always in my way. This is pretty dangerous because I need to be careful not to burn it with hot baking trays for example. Nevertheless I had to make something and Lena chose the ultimate comfort food this week, especially according to the wet and cold weather we have right now. The first course were mushroom and potato tartlets. "Uhhh, something vegetarian. It will taste like nothing just with potatoes and mushrooms ..." my hubby claimed when I told him what we would have for friday nights dinner. I got a little bit mad, in my opinion even blank potatoes are not tasteless. I remembered a pizza I made with potatoes and rosemary (and a bread as well) and those things were far away from tasteless!
"Well, at least, there is cheese on top." he said when he had a first glimpse at them. He loves things topped with cheese, and I used our favourite goat cream cheese for the tartelets. They must have been good, because he ate them without any more complaints ...
In my opinion there were lots of flavours, especially because I bought fresh brown bellybutton mushrooms and chars. Instead of leek, shallots and garlic (which would have been to much for my digestive system) I went for spring onions. The whole tartelet was tasting really good, the only thing that bothered me was the dough (which was crumbly, I guess because of the gluten-free flours) and the whole assembly process. It takes time to prebake the crust, fry the mushrooms and cook the potatoes, so this is no quick meal. I made 6 small tartlets (3 for one of us) and I felt stuffed after eating mine. Bea suggests a salad as accompaniment, but this would have been too much for me. There had to be some space left for those delicious baked apples. I usually only make baked apples around christmas, filled with almond paste, nuts and cinnamon. The recipe wasn't reminding me of christmas at all, so I was curious how it would taste. It was another recipe that took time, because you have to make an infusion of apple and lemon juice, lemon zest and a vanilla bean first. The apples are then filled with a mixture of pistacios, almonds and cranberries, a cinnamon stick is put in the middle, then they are 'drained' in the infusion and topped with some olive oil and sugar. The supposed baking time is an hour, mine were done in about 40 minutes. You need to keep an eye on them, one of my apples "exploded" (split in half ), and the infusion became a thick caramel-like sauce which nearly burned. They were fabulous anyway. I served them with cold vanilla sauce - what I always do, but I think vanilla ice cream would have been even better. Roundup: Tartlets - Nice comfort food for cold days, especially if you want something vegetarian.
Baked apples - Yummy! Something to make over and over again, regardless the season. I need to create a BBQ version ...or serve them with vanilla ice cream next time ...
gepostet am 15.2.13 1 Kommentar:

This is a post that has been 'hanging around' into the depths of my drafts for a while. I don't know why - I loved the outcome of my own creation and the pictures that I took, especially because I could share a story with it. So that's what I am going to do with you now.
I love milk rolls - or sweet buns. It's a sweet childhood memory, eating them (still warm) fresh from the bakery around the corner with some butter (and jam) and with a cup of hot chocolate. Or just plain as they were as a sweet treat in between. While I was studying in the north of Germany, this was the first thing I always got when coming home, because I missed them so much. The bakeries in the north always baked them with raisins - and I hate raisins. Unfortunately I never managed to bake them on my own, they always would get a hard tasteless mess - I have to mention that during that time I still suffered from my fear of making dough with yeast. Years later I did overcome that fear thanks to the challenges of The Daring Kitchen. But trying those sweet buns again never came to my mind again because they were easily availiable here and I didn't have that craving for them anymore...
... until I read the 2012 March/April Issue of the Jamie Oliver Magazine. It contained a feature about sweet buns (British bun recipes, of course) and this feature ignited my love for sweet buns again. Was I willing to try to bake some again, after failing so many times before? I definitively was! And as I had an obsession with raspberries and muesli at the same time (it was raspberry season), I decided to combine everything together. I took the recipe of the Chelsea buns and adapted it to my needs. I loved the outcome - I wonder why I didn't bake them again ever since ... Another bunch of recipes to try from Bea's cookbook. Luckily Lena chose (again) some I could make too. Really, I am glad she could motivate me to bake and cook again because it gets harder and harder at the moment. My feet looked like bloated marshmallows afterwards from standing the whole time, but it was totally worth it.
The first course were tartines with avocado - or so to say - guacamole and shrimps. The guacamole was made with lime and cilantro and seasoned with cayenne pepper which I found very tasty. Unfortunately there is no way to get fresh shrimps around here, so I had to use frozen ones which (as you might imagine) do not taste as good as fresh ones. I served both not as suggested on a kind of baguette which we like to buy fresh on our shopping day (because it just tastes good when its fresh). I guess rye bread would have enhanced the flavour, but we liked it as it was. The second course were cookies with white chocolate and cranberries. I've made such cookies before (recipe in German) and didn't found them very appealing. But this recipe was different - the cookies are gluten-free and you use three different kind of flours which give the cookies a very nutty flavour. Also they contain lots of almonds which changes the texture. They do not spread that much and do not become as flat as the ones I made before. I used my hands (not a spoon) to get evenly sized and shaped cookies which worked great. They turned out the size and height of those 'American-style' cookies you can buy at the store but tasted a thousand times better! My hubby was standing in front of the oven, watching them and asking eagerly when they would be ready. I don't need to mention he barely could wait until they were cold ... Roundup: Tartines - Unless I can get hold of fresh shrimps, I won't make this again, but guacamole with cilantro and lime tastes great. Definitively something I should remember.
Cookies - Those are cookies I consider 'American-style'. Will make them again - maybe with less sugar and dried cherries, but that are cookies that deserve the name.
gepostet am 1.2.13 Keine Kommentare:

My baby girl has arrived! The little one consumes all of my time at the moment and I'm glad when I get the chance TO EAT (not to speak of cooking or baking - impossible). I'll try to keep posting, but I cannot participate regularly in challenges anymore or share new recipes. So I hope you will be patient with me ... 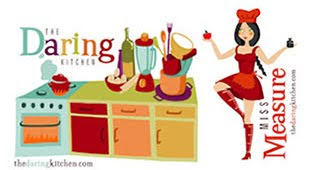 The Bread Baker's Apprentice: Mastering the Art of Extraordinary Bread
by Peter Reinhart